A top 10 finish for Pete Major in Race 2 of the Toyota 86 Racing Series at the Supercheap Auto Bathurst 1000 was the highlight of CGR Performance’s campaign at Mount Panorama today.

After qualifying 24th on the grid, Major improved to 16th in Race 1, and steered clear of carnage in Race 2 to finish in eighth position.

“I managed to steer clear of the incident on the first lap, and our race pace was really strong,” Major said.

“We were a little down on straight-line speed so it was hard to catch some of the other cars down Con-rod Straight, but we’ve made really good progress so far.”

Team owner Dylan Thomas was working his way towards the top 10 in Race 1 before being turned around in the Cutting and dropping to the rear of the field, ultimately finishing 27th. He also avoided the Race 2 carnage, clawing his way up to 12th at the chequered flag.

“I enjoyed racing through the pack, and I was very comfortable in the car,” Thomas said.

“During the incident in Race 2, I saw a cloud of dust – I looked through it to pick a safe path to the other side and fortunately we avoided any damage.”

Tim Brook finished seventh in Race 1 but was eliminated from proceedings in the Race 2 incident, while Simon Samoilenko finished 28th and 26th in the two races.

The third and final Toyota 86 race of the weekend is at 7:30 tomorrow morning. 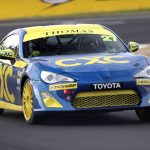